Any Euro tour is defined by the ease of wifi access and the luxuriousness of the Sprinter van in which you roll.

These rolling Legos are the workhorses of the continent, and they become the familiar clubhouse over the course of a few long drives.
You learn which seats suck, and which prized ones afford the extra five degrees of recline tilt, allowing your back to uncoil just enough to welcome a 10 minute nap.

When we load in to the clubs, we check the other bands’ rides out of curiosity.

There are larger boats, sure. Some have bunks built atop the gear storage, seen some with x-boxes and personal screens onboard.

But we are perfectly happy campers in Frankie’s van, stretched out across a couple rows of seats and a hot spot gently beeping in the usb port as we pass in the shadow’s of the Wurzburg castle. 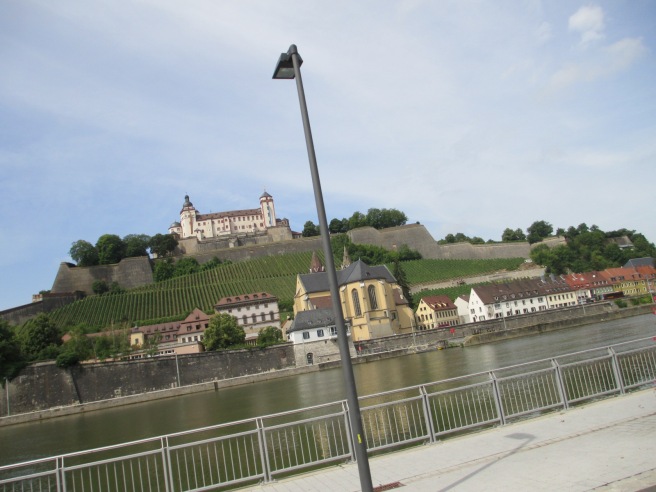 It is a short drive over to Karlsruhe, plenty of time to stop for a Greekish meal of souvlaki and gyros on a sunny patio. 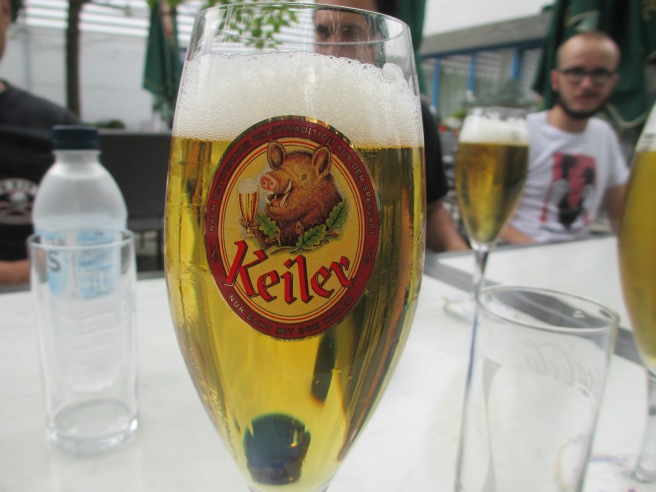 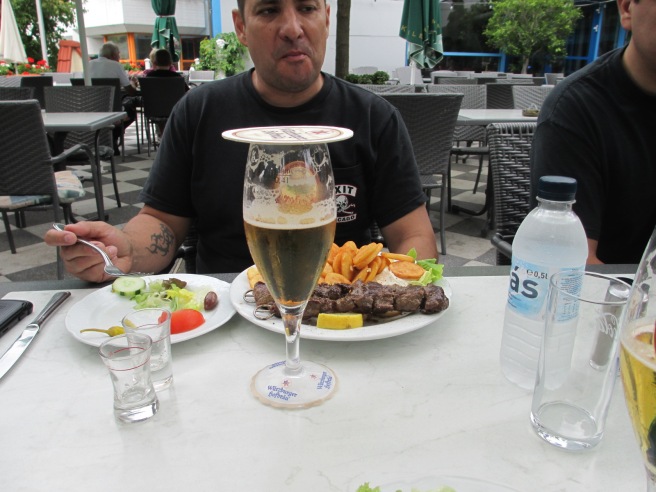 And then a quick stop at the local music store to stock up on supplies, as Alfie has left a trail of broken sticks in our wake: each stage littered with enough splintered wood to resemble a hamster’s spongy cage.

We get to Karlsruhe, a check into the hotel but there is no sign of Adolescents.
It seems just as they roll into town, the Sprinter they had picked up back in Poland has called it quits.

The relentless schedule those chaps insist on was apparently too much for the old girl, and at this stop the differential threw up it’s ground down guts in protest.

We work it out with our van and Frank the Tank to get the gear to the club as we trip around the whimsical beer garden under the hotel grounds. 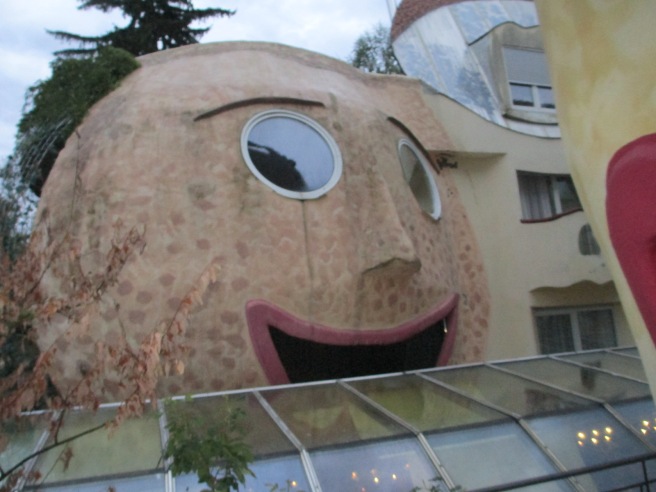 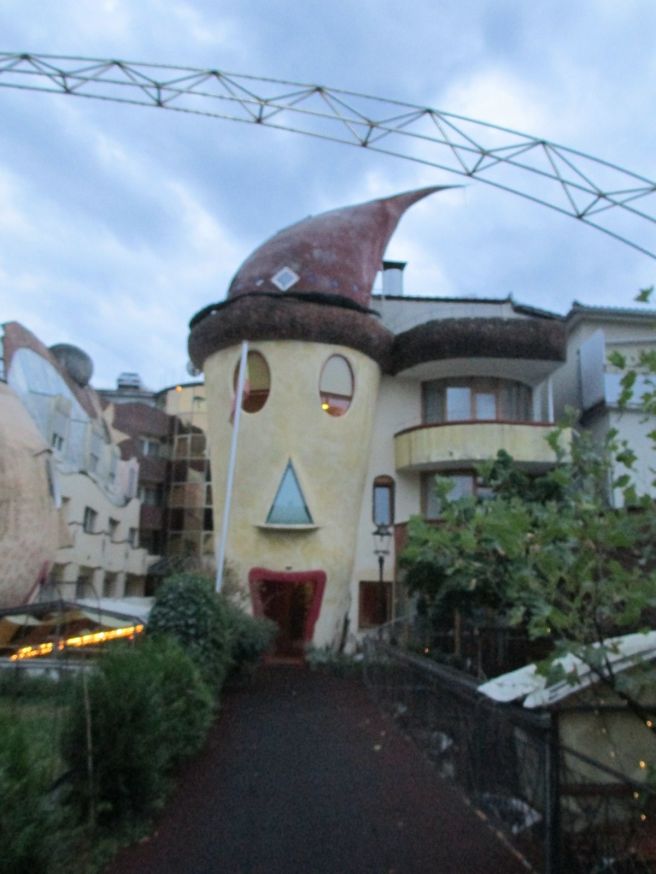 It’s a cross between a beer garden and Pee Wee’s playhouse down there, just the place for childish drunks–ahem!

Another grand night in Germnay, amd we’re greeted by a few fans who actually know us!

And then perhaps the nicest treat, gettting to see the Adolescents play two nights in a row! 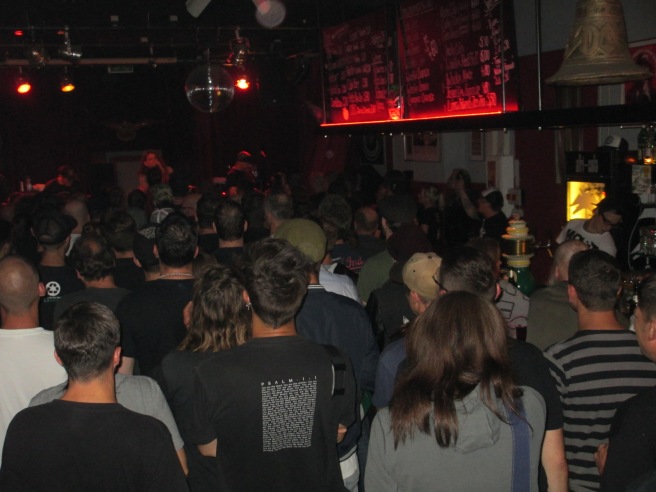 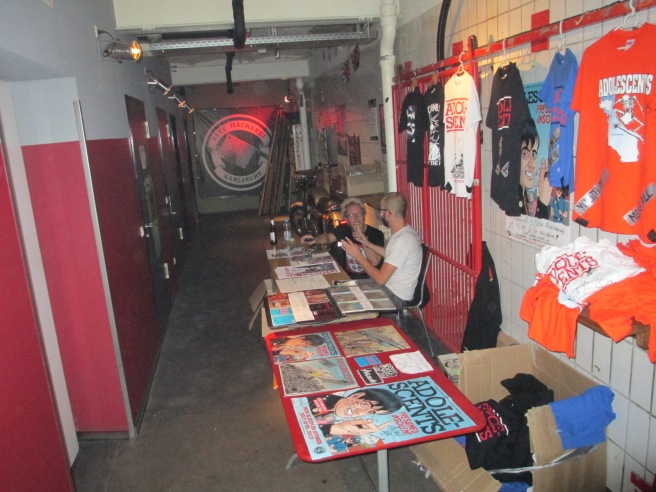 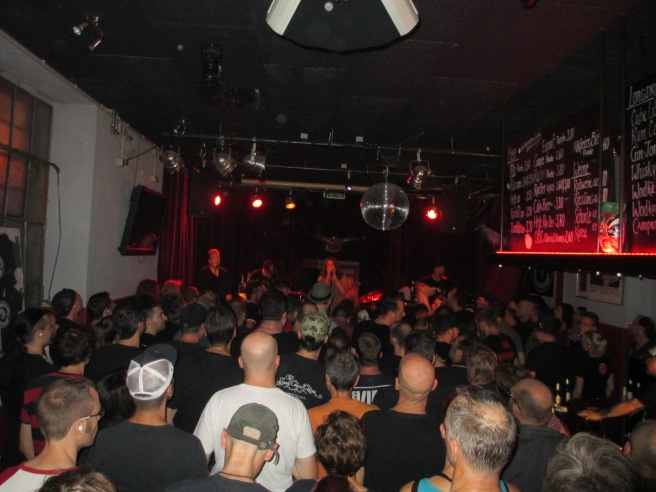 There’s time for a few yucks after the gig, but all too soon it’s back to the hotel and back to business. 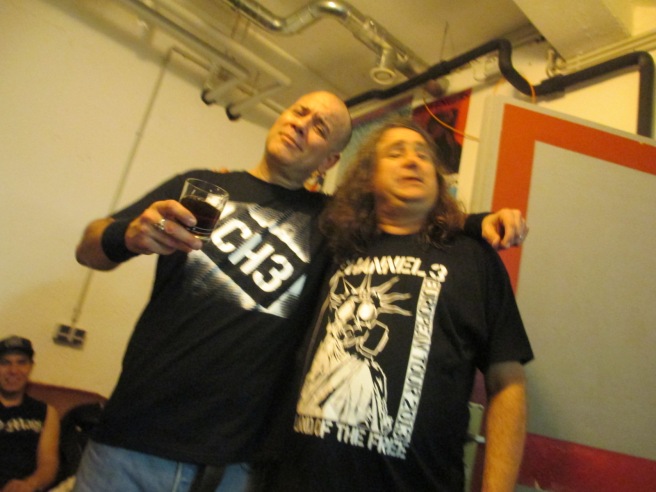 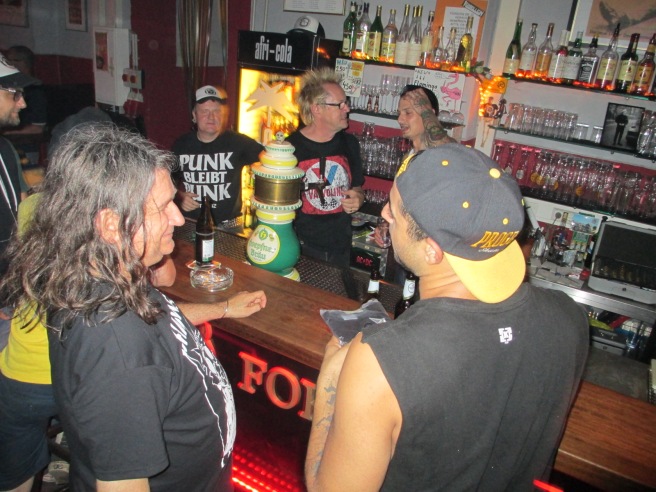 The Ads camp out in the WiFi zone of the lobby, trying to get a replacement van in time for their gig Thursday night in the Netherlands.
We only have time for a quick rinse and it’s back in the van for us, as it’s a night long drive to the Brussels airport.

We say our goodbyes til Ieperfest Friday and hit the darkened Autobahn at 3 am.
And as Frank outs on a Creedence CD and we roll on through the dark, we slouch across the seats, backpack pillows under head and merch duffels as quilts.

Just another Sprinter rolling on towards the next dot on the map, and as close to home as we can claim this far away.

One thought on “The home on the highway”