Well, that damn Christmas tree is finally out of the house and sits yellowing on the curb, a dehydrated monument to the excess of holidays just past.

The eggnog curdles in the fridge, and if I never again hear Wham!’s Last Christmas played over the CVS Pharmacy PA system, I will count myself a lucky man.

And for this, the 50th entry of the Channel 3 Blog, join us as we recap the year that was: 2009 through the bleary eyeballs of yer ol pals in CH3!

The year began as it often does, a trip to Vegas for BYO’s annual Punk Rock Bowling Tournament. We finished a dismal 162 out of 163 in our bracket, though we claim shenanigans as Alf was absent most of his turns. Seems he was trying to ride the animatronic bear in the Laser Bar woods, the scamp!

Late January found us up in the wilds of the Pacific Northwest with our pals in DOA, a couple shows in Seattle and Portland.
The rains were merciful, the Pho sublime, and we learned that PDX International is not a half bad place to watch a Superbowl game.

Half time with Springsteen? meh. Bring back the kids from Up with People, that’s what we say!!

February, cruel bitch of a month that it is, does not disappoint with its gray montony. Things are broken up by the first Alex’s gig of the year and the NOFX party…..

The late winter lull was strangely quiet. Hmmm… don’t have much to report on the band front, but perhaps you might enjoy this video of a cat coughing up a hairball: Enjoy!

We welcomed the Vernal Equinox in proper fashion, a trip out to Rosemead!
This post, Spikes in Rosemead was the first in our popular Our Last Gig series, and made an International Media Star of our man Paulie.

A couple warmups for the Summer, and then onto June with a couple shows with the Circle Jerks, at the San Diego and Anaheim House of Blues….Houses of Blue? Blue Horses? —eh, you know…those big corporate clubs where a Vodka Soda costs 12 bucks!

The year half over now, and got the devastating news. Old chum Fat Paul passed on. The man will be missed!

July wanes and we are off to Europe.

After a quick Transatlantic flight, and a brief bout of jetlag induced delirium, we are rolling across the Continent.
If you’d care, you can always peruse the 2009 European Diary for the full story.

But trust me, the trip can be summarized nicely by the following images: 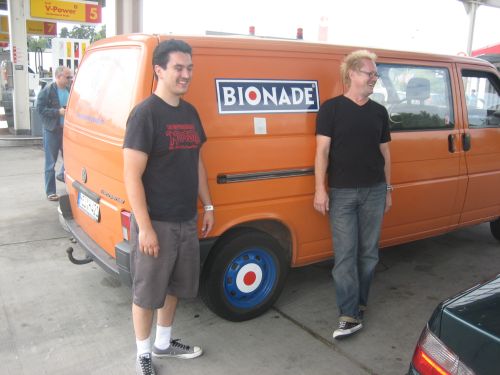 We finally lured Ant and Alf back to the States in time for the last shows of the Warped Tour . We set out on this journey with every intention of losing those pesky extra 6 kilos of wurst weight we picked up in Europe, but it was not meant to be!

What a wonderful way to wrap up the Summer with friends and pretend the bitter realities of the darkening sky weren’t just over the horizon!

One fine Fall day, I think it was late October, the four of us were lying in an open meadow, the patient Earth cooling beneath our backs. Idly chatting, we each picked a cloud and interpreted its shape.

A Pony.
Amputee riding a hermaphroditic elephant.
An Advair inhaler.

By God, I love being in a band!

Where were we?
Ah.
Summer’s over, and the year speeds up toward its own demise. A quick jaunt out to Vegas:

And then onto the Holiday season and wrapping things up in proper fashion: Back to Alex’s Bar!

The celebrations over now, we all seem relieved that 2009 is over. With every hope that the future holds fluffier towels and colder beer, it’s onto 2010~~!