Alright wiseguys, we’re back—though none too happy about it!

Oh, we’ve been getting the usual snarky remarks lately:
Sheesh, 2 months without an entry?
What the hell? What is this, just another punker blog abandoned?

The words suddenly dried up, like one of Courtney Love’s tweets that disintegrate into an indecipherable trail of asterisks and ampersands while she nods off on a barstool at The Roosevelt?

Ah, shut the fuck up, we hear ya.
Yeah, yeah, I know you just got that new Android 4G, and ya just can’t wait to break it out in the men’s crapper, necktie draped over shoulder, and waste precious company time readin about yer old pals.

Just look at ya! Don’t you know there’s a goddamn recession goin on???

When we last left our heroes in June, Summer was just a young pup.
And as we stood on Santa Monica blvd that evening long ago, the days growing longer and the prospect of the Angels and Dodgers meeting in the World Series still a possibility (Har-fucking-Har), we planned on making the most of a Summer off the road.

We were definitely gonna get back in the studio, finish up a few tracks and have a new album ready for the Fall!
Maybe a new Tshirt design, yeah, that’s it. Something that combines Anime art and Olde English lettering maybe? We’ll get right on that!

So what did we accomplish this Summer?
Well, unless you consider reaching level 36 on Nazi Zombies and being at The Goat Hill Tavern every weekday for Founder’s Hour as stunning achievements, I think you got yer answer.

So when we received word to report to the Bay area for some gigs in August, it was with a weary sigh that we put down the remote, said goodbye to Shark Week and replaced rusty guitar strings.

But just like Zep in The Song Remains the Same, we crumpled the telegrams from Peter Grant with steely resolve, kissed the families goodbye and headed back into the glare of the stage lights!

A quick jaunt up the 5 and we’re there in no time.
Of course, half your travel time is waiting in line to cross the motherfuckin’ Bay Bridge on a Saturday afternoon.

Ah, the Bay Bridge.
Where humanity meets for lunch, where the yuppies and pervs, hippies and gangsters are all blended and funneled into the community they call home!

It’s a matinee at the beloved Thee Parkside first up on the agenda, and we crash through the doors breathlessly to catch our pals The Doormats rippin through their set:

The fellas are sounding better than ever, playing well…perhaps a little too well, hmmm?
They get off stage to a rousing ovation and we immediately accost them and accuse them of actually practicing for this gig. Shameful!


We stumble through our set, managing to remember every other lyric and missing the proper guitar chords by only a half step.
We gasp for air between songs and beg for merciful beers, but the discerning matinee crowd stands with arms crossed and makes us play the songs two, sometimes three times in a row until we get them right!

But it all comes back soon enough, and we play I Got a Gun for the official 13,457th time before jumping off the riser and making for the glorious patio on a warm Saturday afternoon:

Ah, to be there surrounded by precious friends on a stunning SF afternoon.

We toast the day with buckets of Miller, and toss toasty tater tots high in the blue sky before catching them in mouth: Hungry birds waiting for mama to regurgitate greasy salty goodness into gaping beak!

Kimm and I head upstairs to do a quick interview with our old pal Mike for Radio The Way You Like It. 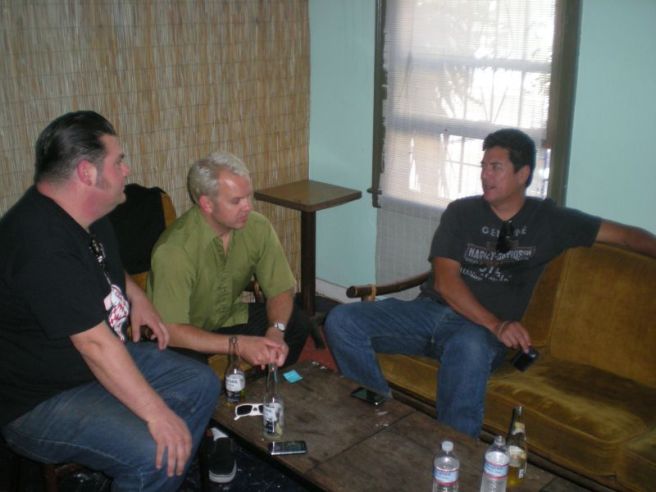 We’re distracted, though, as we can hear the laughter of chums and the openings of bottles just out the window.
We chat a bit more, and then head back to the patio to enjoy the waning day.

The afternoon progresses in the usual fashion: 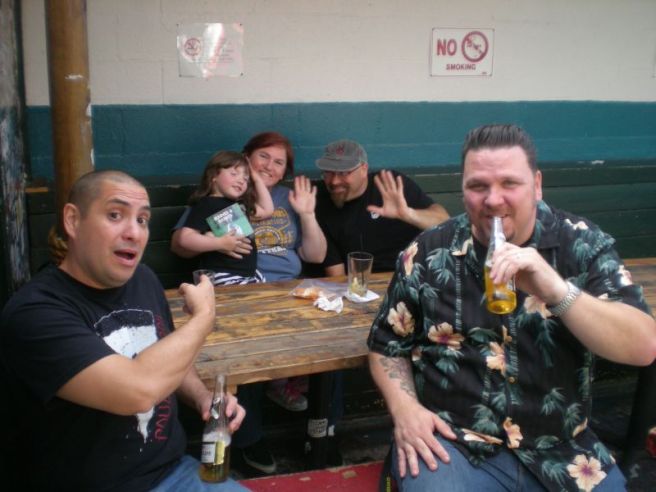 It’s been grand, and as the sky darkens we head back into the club to pack up the gear and load it out once again.
It would be nice, wouldn’t it?– to spend the rest of the day in the city, eating and sipping our way into a blissful coma state to match these last couple months off. 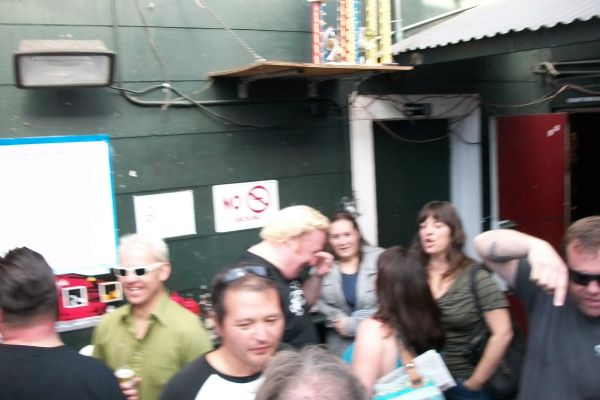 But no.
It’s back across the Bridge yet again, and another show tonight in Berkeley.

Seems like the Bay is not done with us just yet, not by a long shot.