Oh those golden puffs of wheat
Got a crunch that’s crisp and bold
Gets me moving and a grooving
With a taste that’s solid gold!

Say, what’s that yer sayin?…….
is that what you wanna know?

Perhaps a few penciled lines, scrawled on the margins of a Racing Form discovered next to Bukowski’s cooling corpse?

I read those four lines over once again, trying to memorize their genius stupidity and trying to find the meter of the bizarre stanza.

We are sitting there, Kimm to my right and Jay to my left, in the polished reception of a mid-Wilshire casting office.
The year, I’m putting this right around Spring 1985 or so, judging by the wardrobe:

Kimm’s hair is freshly bleached out and teased to impressive heights.
Jay has on 4 clashing silk scarves and is wearing a neon night-crawler fishing lure as an earring.
I heft one white cowboy boot over a seat arm, gouging the Naugahyde mortally with a proper English style riding spur.


And we’re waiting in this lobby to read for a commercial.

That’s right, so sue us already!

See, we were in the middle of our hey, nobody gives a fuck about us, so we don’t give a fuck what they think! phase of our career, when the punks had enough of the harmonica solos and midtempo weepers and left us for dead.

Aimless, restless, we worked on new songs that amused only ourselves during the days, and played sets at The Music Machine under phony names at night.

Yep, that was us.

We had some new manager, someone who I’d certainly never met, and he had directed Kimm to round us up and report to this address on a Wednesday afternoon.
Seems that Post was going to go a little sleazier in the new campaign to get kids to eat their crap!

Rockers in commercials?
Oh, we heard the legend a million times, about how the goddamn Police dyed their hair specifically for a Wrigley’s Gum commercial…and look at them now!
Why, there’s no harm done…in fact, this will be a good thing!

We looked around the lobby and saw a couple other groups of groups here for the same gig. A few of them, the other unlucky singers, studied the lyrics while the rest of their band members were teasing hair and putting on more eyeliner or rummaging through impressive looking makeup chests.

I put my sunglasses back on and popped a zit, about the best I could do…

A set of double doors opened and out came a glammy looking quartet, all black hair and Cuban heels.
Jay knew some of the guys—of course!—turns out it was Candy, a great pop group that’s probably best remembered as Gilby Clarke’s band back then…..

They looked drunk, happily disgusted, and way comfortable in their carefully sloppy outfits.

See, that’s how it goes for little guys, am I right?

Us big guys, well, we try to glam it up and we end up less like Michael Monroe, more like Rip Taylor, ya know?

Someone actually fired up a salon-rated blow dryer in the lobby at this point, and I started feeling a little sick.
How had we got here?

The current commercial was running and we’d seen it: Bruce Springsteen fantasy based in a military boarding shool, all homoerotic undertone, corn syrup and subliminal directive:

And then someone calls out, Channel Three! and we’re next.

I dunno, I was expecting some sort of stage set up, at least some unplugged guitars to hold or a mic stand.
But instead we entered the room to find a man and woman seated on folding chairs facing a table, a wall.
She, all frizzed red hair and bitten down finger nails.
He, J Crew and Topsiders, clearly unamused with his career path.

“Alright then, you are……Channel Three, is that it?”
The redhead marked off a tick on the clipboard and stuck a raw cuticle back in her mouth.

We nodded, and I suddenly regretted not having the Rodeo Clowns come in for this gig in our stead.

“Hah.. okay, funny name. So why don’t you just go ahead and we’ll run through it one time, ok?”

There was one video camera set up, maybe a couple lights, a boombox on another chair.
And that was it.
They hit a button on the boombox and the room was now filled with that goddamn jingle.
And then we started to…..forgive me! rock out.

Imagine if you can, the sight of us jumping up and down in an empty office room.
I’m lip synching those inane lyrics which are now and forever burned into my brain.
Jay does a Townshendian windmill with nothing at all in his paws: air guitar, I believe that’s what you kids call it today.

And Kimm, I think they made him do one take playing air drums, and then another, God Bless him!, where he had to hunch over and play an air keyboard!
He looked like a grumpy Republican, typing out an angry Letter to the Editor in the middle of the night.

The music stopped and we avoided looking at each other while they rewound the cassete for another take…this time you, the tall one….you play the drums, kay?

We had sucked on the cock of the Sugar Bear, it was neither sweet nor crisp……..Bitter, oh, it was bitter!

On the car ride home, we were quiet.
It would be a good story, some day.

But how about we not talk about it for now….to anybody!

Surprisingly, we got a callback, but in the end it was Candy that got the gig. Naturally.

Yet sometimes there I’ll be: Albertson’s on a Monday night, pushing a cart loaded with barely drinkable Zinfadels and 2 for 1 cannisters of solid albacore.

Life seems never more routine than when you are in the Supermarket, where you measure your immediate future in the meals and guilty desserts that you will consume in another identical week.
We eat this food and crap it out, and mark another day off the calendar, that much closer to the end.

But I’ll pause, sometimes, in the cereal aisle, and look into the heavy-lidded stoner gaze of that goddamned bear.
And I’ll think, if just for a moment, what could have been if I would’ve worn the eyeliner with just that much more faith. 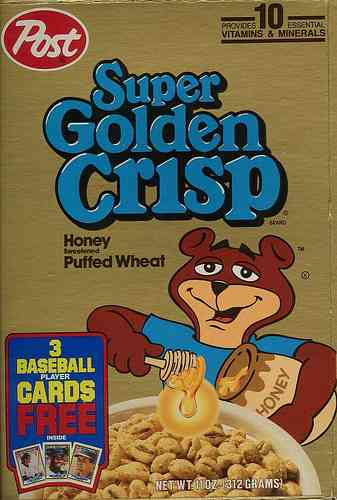