The 91 freeway cuts a perfect part down the middle of Cerritos, and growing up our nights were always haunted by the constant whoosh and sizzle of unending traffic.
A soundtrack that finally faded into subconscious with the years, just as the faint smell of cowshit from those few remaining dairy farms became the normal perfume of a new day.
You would lie in bed and have to listen for the sound of the freeway to finally hear it again, ever present yet unnoticed like the surge of ocean tide.

We’d been practicing in the garage for 8 months, had a set list heavy on Ramones and AC/DC covers.
We played them and played them again, and when Dave Gaumer mentioned a kegger and a chance to play in front of people we said yes, then immediately regretted it.

Oh, we were badass in Mom’s garage alright, playing Blitzkrieg Bop and Whole Lotta Rosie again and again.
Getting the shit down, learning how to play the guitars a little lower, throwing in the windmill now and then. Garage stuff.

But to get out there-to the backyard party!-this was a new and scary day.
The Big Friday finally came, and with it the night of our party debut.

We didn’t have a guitar tuner, so we brought our guitars up to Kimm’s bedroom and tuned up to Led Zeppelins’ Custard Pie, that riff a perfect key of A.
We tuned the guitars and took one more look at the casual outfits we’d spent a week assembling. We put the guitars in case and went to Dave’s.

Now, I don’t know how you kids do it these days.

Oh, you got your GarageBand apps and Bandcamp profile, and I hear this new Myspace site is all the rage these days, am I right?
And then what? is it pay to play at the local shithole?
Just another event created and posted on Facebook, distributed as casually and exponentially as the charming herpes simplex virus2 of our day?

I feel sorry for ya kid, I really do. Set loose in the wilds of sleazy promoters and soul-dead club owners, it’s no place for young pups to grow free range.
What happened to the backyard party, hmmm?!

What happened to the chance to set up next to the pool, what became of the kegger and blankets hastily thrown over Mom’s best coffee table?
The chance to play Rock Bottom very badly while the neighbors either called the cops or wandered over with an empty quart mug in hand.
And when the cops came, the word had already spread of the next party, Maybe Later or Metro Hotel playing just the other side of Studebaker, someone’s parents out of town and an Aunt already passed out upstairs!

High school days, it was the rockin bands that played the parties.
And admittedly, there was no way we were ever going to master the axe compared to those guys.
But what a thrill, to see someone playing music live, right there!
Ground level, in your face-loud!
To witness an actual band playing on the shag carpet, or out in the mud.
To be able to see what made the pick slide sound or see a drummer lose his stick–you couldn’t witness that from a Loge seat at the Forum brother!

And when a new type of band started playing at the parties, a rawer stripped down noise, it was all over!
Perry and Joe show up with Der Stab, the Hated brings the Pistols to the party: it was wild.

Each week someone else would show up with their surfer/stoner locks chopped off, maybe a fishing lure hanging from a bloody hole in earlobe or cheek!

And for some reason, our old hometown became a fertile place for these parties, two or three any given weekend night was not unheard of.
Directions and flyers were copied and copied again in Social Studies class, rumors of 2 keg bashes passed along the copper wire of actual landline telephones….

How did we get away with it? And where the hell did all the parents go? 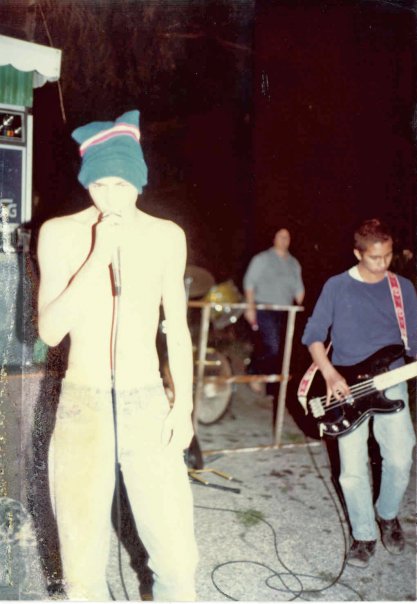 Oh, occasionally there were those parents present, Dad more than willing to break out the booze for the kids and show them how he used to be, ya know, hip himself.
Moms with gleaming eyes amidst the palpable hormonal funk of teenage boys, this decades before the term Cougar is coined.

But for the most part, the house is empty and parents out of town. The kids are in charge.
We load in through the garage. Put a combo amp on the ottoman. A few planks of plywood on milk crates for a drum riser if we’re really going fancy.

Downbeat at 9 o’clock, and with the first chord of My Generation, the main breaker blows and the house is plunged into thrilling sexual darkness.
I would ask you, what the fuck could be better to a 17 year old kid?

We cut our teeth in the backyards and living rooms of that town, though sometimes the parties lasted only a few minutes into the first song.
Ah, but there were those magical nights, maybe the neighbors were gone too (or they were deaf!), and the party would go long into the night: 3 sets, maybe 4.
We’d play Devo and Monkees, Clash and Judas Priest, anything we could pull off, if barely.
20 minute versions of Wild Thing/Louie Louie, with six different people taking turns at the mic.

And we were learning how to play.
Slipping in an original here and there, keeping tabs on the other bands to see when they made the next logical jump:
The Hated gets an actual gig at Cuckoo’s Nest, Injected Insanity cuts a demo tape in an actual studio.

The day came, it always does.
We moved on.

Out of the backyard, and into the clubs.
Out on the road, into the studio, into the grinding machine we all jump into willingly.
Hopefully keeping our heads just above the blades that threaten to shred our very spirit as we keep playing the music we love. 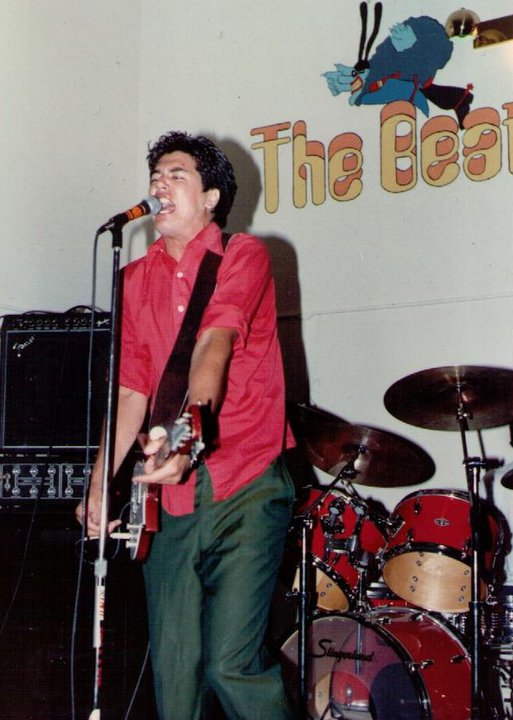 And so, a real honor coming up.
A chance to play a show with our old chums from the backyard days.

And yeah, although there will be a cover charge and drink specials, a proper PA that doesn’t hide the thrilling threat of electrocution, we’ll have a blast!
We’ll play our songs like we were back in the yard, under the stars on a sultry Summer night, in a place that was home.

Dave had cleared out the service porch off to the side of the kitchen. We set up wordlessly, combo amps on the washing machine and our rental PA stacked on the kitchen counter.
We kept our backs to the drunken kids packed into the hallways.
And when we reached for knobs on the amps and guitars to turn and turn again, our hands shook.

We turned to face them and for just a moment they hushed in anticipation. We kicked off–999’s Let’s Face It was the first song we played.

We’d practiced the song endlessly, but we played it too fast and mindlessly, like rolling off the Act of Contrition at the end of a rambling and awkward confession.

But played it right and when we finished, all on the beat, there was a delicious moment of silence.
And then the whole party went whooo! and Yeah!!
And we were now, I guess, in a band.

Outside, after, Red Frances comes up and says we did ok.
I’d known her since 9th grade homeroom, but she was miles away from us all now.
The first girl in Cerritos to dye her hair and start hanging in Hollywood with the actual punks.

She smiled, and then cracked a Black Beauty capsule underneath my nose.

And later, as she had me pinned up against a palm tree trunk, I tasted not only the medicinal drip on her tongue, but also cigarettes, alcohol, lies—-the flavors I would end up living with for then next few decades as a musician.

The waves of the 91 freeway crashed once again and I shuddered involuntarily.
And though it was probably the amphetamine racing through my heart, I closed my eyes and kissed her back, and pretended it was something more.

10 thoughts on “The yard in back: Cerritos, Artesia & Norwalk”