When was it, that this all started?
Maybe mid March?  I mean, I seem to remember all the St. Pats parties cancelled, but wasn’t that a lifetime ago?

Shelter in place, work from home, quarantine.
Whatever you call it, we each held onto own little notion of what these weeks would mean.

Oh, I thought. Piece o cake. A welcome break from routine, even.
After all, how often are we offered a chance to work from home-work on ourselves– and  shut out the distractions and temptations of everyday life?

When these stay in place orders came down, I was energized, not knowing which life goal to tackle first. I’m talking about those luxurious resolutions, long bookmarked for some mythical future place and time of leisure, just shimmering on the horizon like a reward.

Let’s see.  I have always wanted to be able to play guitar along to side two of Abbey Road.
Or how about finally tackling Ulysses, and I’m talking about meeting Joyce on his own terms here, not just slogging through the streets of Dublin as plot driven narrative…..

Meditation perhaps? A whimsical return to the acrylic paints? Juggling?

So here’s what I have accomplished so far:

Yes, like many of you, these past weeks have descended into a harrowing dance of boredom and dread, gluttonous feedings at the twin troughs of guilty pleasure and anxious zeitgeist.

Days have melted together into a fevered nightmare.  Our new national discourse: Tiger King and Tik Tok.
Clips of raccoons dancing to Lizzo. Raging debate on social media regarding white trash zoo keepers.
Who wastes precious time on such stuff?  (But seriously. Fuck Carol Baskin.)

I pull up a Youtube video on how to play Here Comes the Sun, all good intention that I will come out of this with something, goddamnit.

Then Netflix starts yet another 3 season series before you have a chance to cancel.
You sit back down on the couch, resigned.  Let’s binge just one more show, hmm?
This one follows  a subtitled detective around Oslo.
Are you still there? Netflix asks.
Incredulous emphasis on the word:  Still?

I take a moment to think of my parents, faced with their defining moments.
Pop is on a ship moored just off the smoking finale of WWII, Mom huddles in a freezing boxcar on the way to an internment camp.
Then a  heartbreaking loss on Golf Clash  has me hurtling the tablet to the floor.
The Android chimes in that Door Dash has delivered.  Another pitiful day ends in melted cheese.
Mom. Dad.  Don’t look at me.

God, don’t you miss it?
Don’t you miss every mundane thing we took for granted, the traffic jams and standing in lines.  Crowded subway cars and video poker on germy machines, mere inches away from the strangers you detest.

What about a dark and sweaty Hollywood nightclub, humid as a August night in Baton Rouge, fragrant as a marketplace in Mumbai. 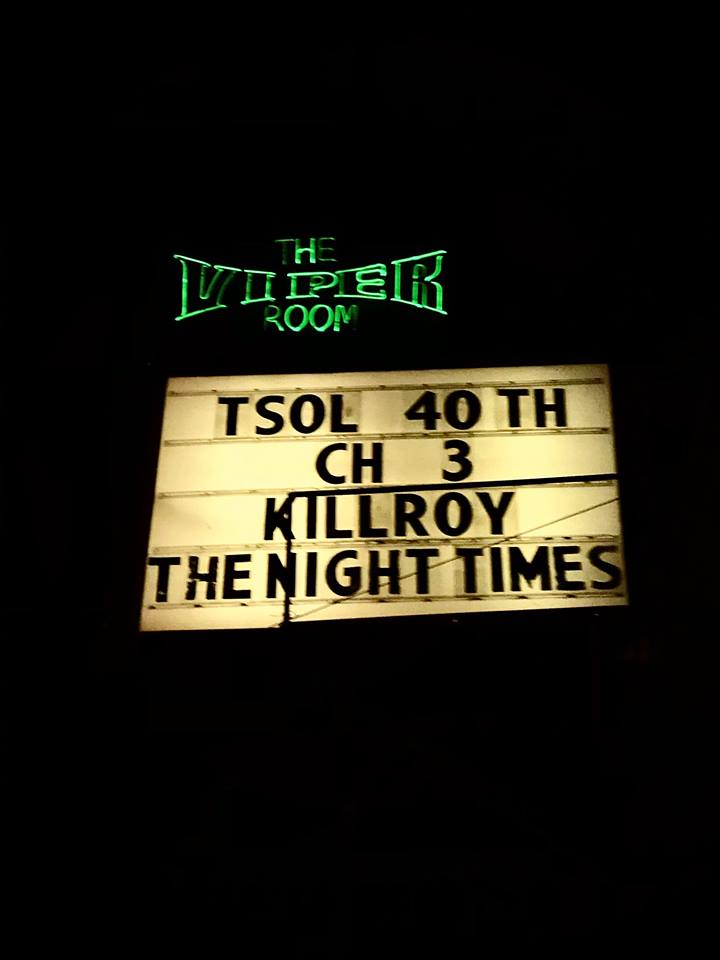 We stand on Sunset, it’s a Friday night.
This was March 6 of this year mind you.  Seems a year ago for all that has changed.

They stage us outside the club while Killroy wraps it up.  They load out quick, we load in quick, just time to tune up and plug into the club backline.

Tiny stage tonight.
I can reach out and touch Kimm to my right, Anthony to my left, without straightening an elbow.
I turn around and clank Nick’s ride cymbal with the Fender headstock.
We are not social distanced, not by a longshot.
Hell, haven’t even heard of it yet.

It’s a packed on the floor too, people here to see TSOL in a small club on their anniversary tour.

And people are also out tonight just because.  A giddy sense that things may soon change is in the air, the bar is packed 3 deep.
Uncontrollable laughter in the cellar while the tornado approaches, it feels like that.
There’s rumors of cancelled gigs on the horizon, disturbing images from Italy and China.

But for tonight we’re alright, we’re in here together.
And we’re together by inches, brother.
We play a quick set, the room bounces along.

We get off stage and load out straight back onto Sunset, visible steam rising off our sweat drenched shirts. The street is already quieter than it should be for a weekend night, but it feels great to be out here.
We take in gulps of fresh night air, like surfaced submariners allowed their turn up the hatch for 90 delicious seconds.

We lock the gear in cars and go back up the steps to catch the TSOL set, all the while being hugged by friends and shaking hands with strangers.
All thought of caution gone now.  We are resigned to share the germs alive or dormant with the others in this room, none of us knowing the sober reality that lies just beyond the weekend.
Jack and the guys hit the stage, they roar into Abolish Government, the pit goes off.
A girl licks a monitor on a dare.  Someone spits a  mouthful of beer from the middle of the floor.
Sweaty bodies collide and deflect into new slam pits, a pattern mutating like an  insidious virus that lurks just there.

I think about that night now, so long ago, just a mere six weeks ago.

I thrill at the memory of guitars turned up loud and just out of tune, then shudder at the thought of all of us packed together in that room, not a mask or latex glove to be seen.   When will it ever get back to normal, and what will that normal be?

So we’re asked to stay in place, knock this thing out as a country.
The math of the whole thing makes sense.

And really, what are we being asked to do in our moment of crisis, beyond staying in, being cool….. I dunno, not being assholes?

The Netflix screen changes in my periphery, asks if I am still there.
Yeh man, still here.

One thought on “Our Last Gig: Viper Room Hollywood”