As a kid–and this is the 60’s I’m talkin about, natch!~-San Francisco seemed like an evil and twisted place.

All we knew of the fog shrouded Gomorrah up yonder came from Dirty Harry Movies, newsclips of moustachioed biker gays dancing with smelly looking hippies, and of course, the Zodiac Killer!

To a sheltered suburban child, it was a frightening thought to visit this place.

(Of course, the stacks of R. Crumb comics that my older brothers brought home from secret visits to the Head Shops on Haight brought a begrudging consolation!)

Oh sure, Ghiradelli and the Cannery were jolly distractions.
But still, you had the feeling, even when walking hand in hand with Ma along the tourist trap haven of Fisherman’s Wharf, that at any second you could be snatched from parent and swept away to the bowels of Chinatown to serve out your youth as a sex slave – or worse! – kitchen worker!

Then there was that maniacal 30 degree intersection of Columbus and Broadway, where the city proudly advertised its sleaze with signage that thrust phallically into the inky skies above!

Ah, but punk rock changed all that–doesn’t it always?!

How we grew to love that intersection, as The Mabuhay and later, On Broadway became our favorite clubs away from home!
– 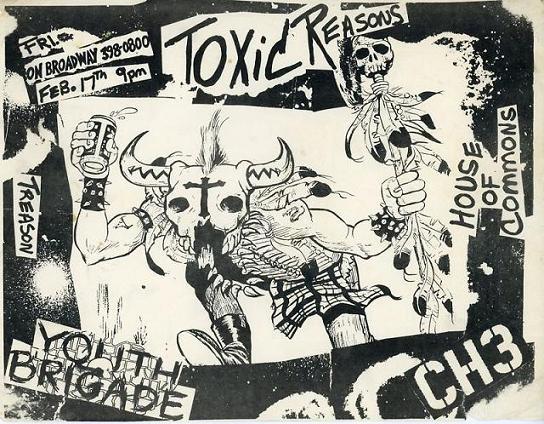 Too busy destroying our rooms at the Broadway Manor and running from Beer Truck drivers, sweating flats of 24 Budweisers in hand!

We fell in love with the city and took the slightest excuse to come back.
Through the years, circumstances changed, the band rode waves of popularity and ridicule, yet that nutty town stayed there, just how we liked it, reliable and comforting as a childhood memory that is recalled during crackling thunderstorms.

Oh, Rambo, you yoked up vigilante, we love ya!
The fellas all stir as our favorite scene comes on: Rambo actually jumps out of the water and straight into a helicopter—Swear to God!
And this is before CGI, people!

It is a fresh Sunday morning in Berkeley with the day off, so we jumped out of jammies, wet down the cowlicks, and made straight for the city!!!

Well, after a civilized panaderia and carnitas breakfast at Casa Latina , of course….

And, yeah, maybe a few dreadful chicken strips from Popeyes for the walk to the BART, yeh?

Off at Powell, and after a quick bathroom break at the venerable Gold Dust Lounge (where, swear to god–they mistook us for firemen! No, we did not correct them!)—it was straight to Jack Kerouac Alley.

Ah, that glorious strip of pavement, where we used to illegally park a van loaded with amps before they put up the goddamn street lamps.
You go in one door, into City Lights Bookstore to stock up on yer Black Sparrow soft covers, and then it’s just a 12 stride jaunt across to Vesuvio’s to stock up on Anchor Steam and Jameson!

Is there anything better, really, than to sit up on the second floor of Vesuvio’s on a sunny Sunday afternoon? 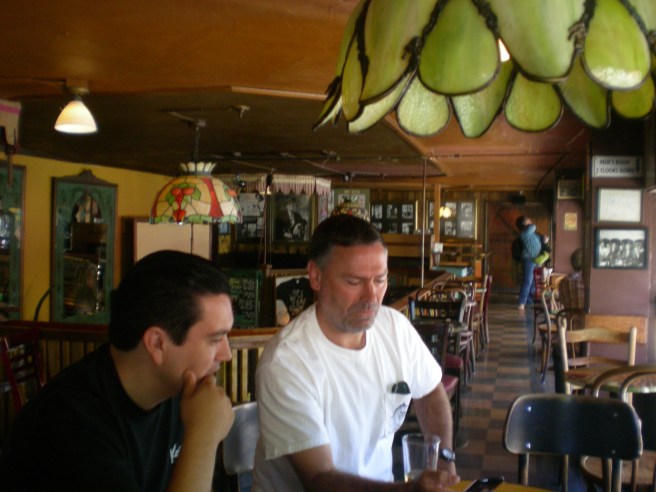 The gas lamps flicker just below, and you sit there amongst pals with only pints of pale ales and the rusting bonds of time between ya.
Heaven, I tell ya!

Good news! Jet Blue has delayed the 6:30pm flight to 9:45, leaving ample time to get across town to meet up with the Doormats crew @ Zeitgeist .
Hell, we even have time to stop into Bings and let the boys roam the whack shacks for a while!

A cramped cab ride across town and we hit Valencia and Duboce as the day cools.
The joint looks quiet from the street—it always does. 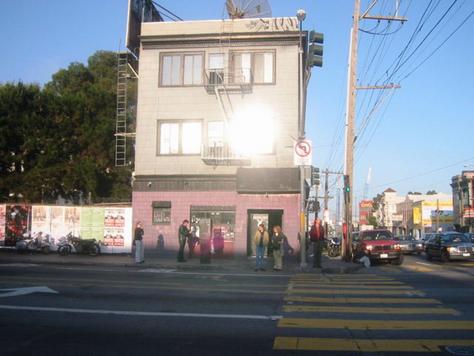 But through the bar and out to the patio, and now you know where the survivors spend their Sunday afternoons, healing the wounds of Saturday night and bracing for another week in front of the digital monitor! 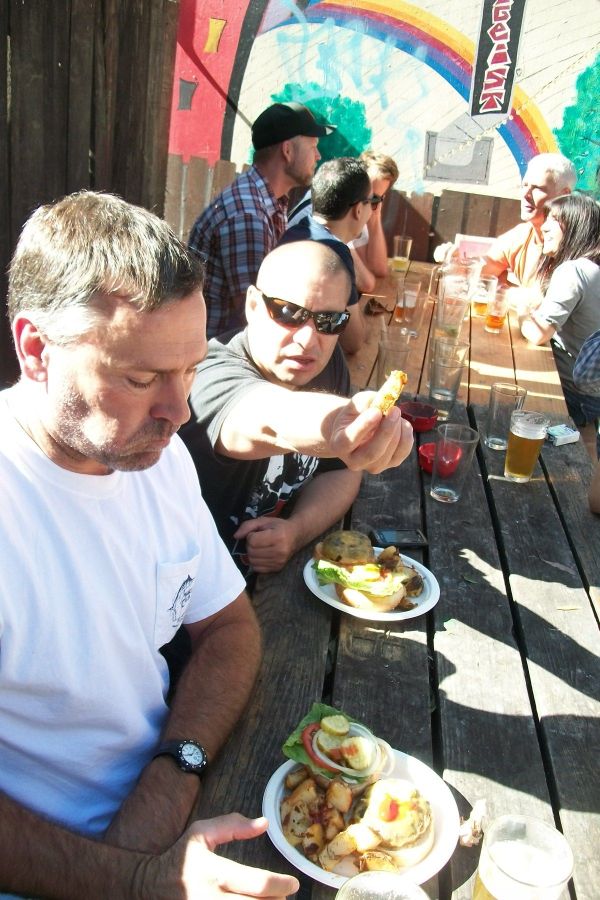 Smart phones chime, as Jet Blue has delayed the flight yet again.

We toast this good news with our pals and the same old stories are told again, louder and brighter.
Pitchers are brought in quads, 2 to a fist, and the empties are drained up to make room.

It’s all laughter and tears now:
We sit at our picnic tables like excited third graders at lunch on a Friday: Pizza Day! 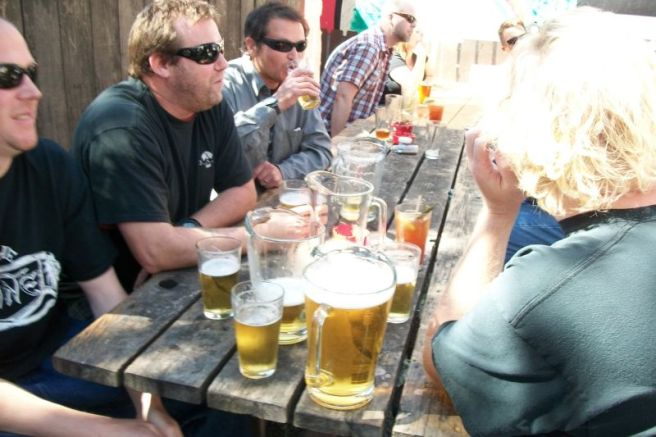 The shadows climb the walls and someone looks at a watch and makes calculations:
Back over the bridge to the BART to pick up the car, drive to the airport in time to be fondled and abused by security: We gotta go!
We head inside for one last round with our Northern pals, and plans are made to meet again, and let’s not make it too long mate! 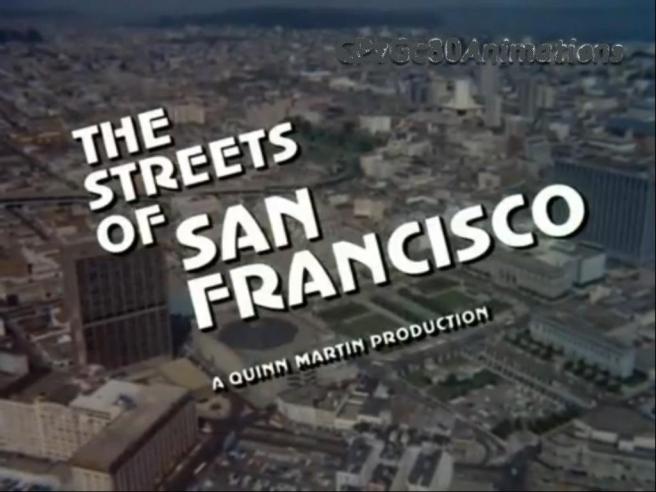 Monday morning and I open my eyes expecting the familiarity of my bedroom, perhaps the soulful eyes of my dog abandoned these past few days.

I am in a corporate hotel in Oakland.
Still in the Bay area, we somehow missed our flight home.

I turn and see Kimm snoring peacefully on the next bed.
He has apparently traded clothes and is now wearing a dazzling Ed Hardy t-shirt that bears a silver foil tiger.
The big cat’s eyes seem to follow me as I make it unsteadily out of bed and look into the mirror.

I am shirtless, and have a red necktie on.
On my head.

I recall something about making it to the airport too late, being given a boarding pass for the next morning and being led gently out to the curb.

We stand on the sidewalk near midnight now, wondering what to do next.
A clattering above, there is a helicopter busy overhead: not unusual for Oakland.

That’s when the red tie ended up on forehead.

And being Rambo, after all, I jumped for the helicopter.

I jumped again, again, and finally grabbed the spindly rail.
Larger in diameter than it looked from the ground, the powdercoated tubing feels thick in hand.
I adjust my grip and hold on tight.

The whirlybird takes me up, and away, and soon we were breaching the black water below.
We fly back again, back toward the glistening lights of that city.

I wasn’t, apparently, ready to go home.
Not yet.